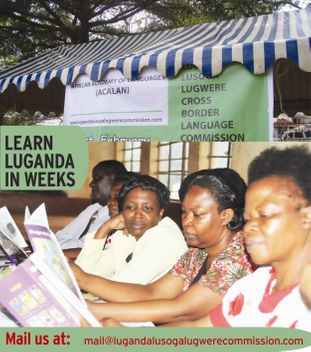 LUGANDA is the L1 spoken by the biggest number of people(over 4 million L1 speakers) and the most widely spoken L2  language in Uganda, apart from English. (Ethnologue)  It is used as a language of trade in most of Uganda's trading centres. It is the language of the Baganda' the biggest tribe in Uganda found in the central region where the capital is.

In this language, syllable sounds are pronounced as they are written in most cases except for a few exceptions.

This literally means 'How was your night sir?" and is the equivalent of 'Good morning sir'

Sometimes otyanno (o- tya- nno)  is used instead of otya but the meaning does not change:

GREETINGS FOR THE REST OF THE DAY:

For the rest of the day, the Luganda greetings are:

The same greeting is used in the evening when you want to say "Good evening".

KI KATI?    Ki   ka- ti?  This literally means "What is going on in your life or around you?" The Baganda love news and originally,  after the above formal greeting of Osiibye otya?  they would then as continuation of the greeting ask: "Amawulire?" or "Agafa eyo?" These both literally mean: "What is the news?" or "what is happening where you are coming from?" This is what the later generations shortened to "Ki kati?"

The respondents answer: Nedda, Ki kati?  literally meaning, nothing, how about you?

This literally means "How is your life? and is also the equivalent of "How are you?"

The respondent answers: Bulungi which means Good or fine or 'si bubi' meaning 'not bad' and when the respondent does not feel well the answer would be 'bubi'  ( bu- bi) meaning bad and then continue to explain.

But if you get a visitor you start with the welcome words and then the greeting:

And the visitor replies: Eradde- It is peaceful.

After welcoming a visitor, a host will show him/ her where to sit before the greetings. The following will be used to guide the visitor where to sit:

You may find yourself in a situation where you have to introduce yourself.

Somebody may ask for your name or you may give it without being asked.

Erinnya lyo? [E-ri-nnya lyo- pronounced as lio ]  What is your name?

You may wish to show appreciation to somebody by thanking him/ herfor whatever reason. You may use the following:

Nneeyanzizza [nnee-ya-nzi-zza] - Thank you (usually used when somebody gives you something physical like food, a drink, etc.)

These are some of the examples.

DO YOU WANT TO LEARN LUGANDA?

What is Okunyugumuza called in English

Thanks for the updates.